The Nah Skwell Nahskool is billed as the ultimate stand up paddle board for learning. Accurate volume distribution and width is said to give a better riding sensation during those initial stages.

I managed to get hold of the Nahskool 10.5ft and take it for a spin – here’s what I thought.

The conditions during the review were pretty choppy to say the least. A moderate side shore breeze was blowing causing short sharp flotsam to build up. The tide was low and a dribble of a wave was hitting the beach.

For newbie paddlers conditions would have been tricky and less than ideal.

The Nahskool is very distinct and typically the bold Nah Skwell graphics lend the board a certain character. Every brand has its own personality and Nah Skwell are no different in this sense.

The attention to detail, and well thought out features, such as the comfy padded deck, with colour coded areas for accurate foot placement, add to the overall quality feel of the Nahskool 10.5ft.

Gone are the days where 12ft + boards are needed to get beginner stand up paddle boarders up and sweeping. SUP design, over the last few years, has improved dramatically meaning shorter and less cumbersome designs are now applicable for first steps.

Not having to lug a massive stick to the water will be welcomed by newbie paddlers and although the Nahskool isn’t the lightest, it’s still a doddle to transport and put in.

The 32” width and ample 220L volume makes for a very stable ride; even without any prior SUP experience paddlers will have an easier job while learning on the Nahskool.

The annoying chop and cross wind, during the test, would have been off putting for many, and yet, such is the composed nature of the Nahskool, most beginners will be standing tall in no time.

As you would expect from a beginner board, there’s a fair amount of slap paddling into wind causing by the fat rounded nose. Narrower, more pointed sticks would cut through chop easier – but the Nahskool isn’t an advanced users SUP. Although progress into breeze is slow, newbies wouldn’t notice this.

If concentration is lost then the Nahskool is forgiving enough to allow beginners to correct themselves – meaning less dunkings which as a result confidence levels will rise.

Sweeping back with the breeze on your back the Nah Skwell actually picks up a fair old pace and although downwinding isn’t the Nahskool’s forte it actually handles rollers well. 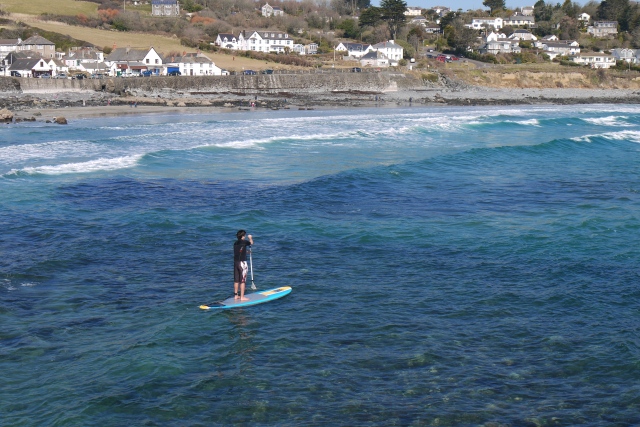 You may bury the nose into the back of swells but the bulbous nose pops back up to the surface without any unnecessary trim issues.

Even though there weren’t any real waves to speak there was enough of a bump to get a few glides.

Picking off ramps and sliding sideways was easily accomplished . Even on the smallest and most gutless wall, the slide carried on rolling. In some cases a touch of vert would wall up allowing for a couple of ups and downs. For a board which is marketing as a surf SUP, the Nahskool handles the introduction to waves well.

The Nah Skwell Nahskool 10.5ft is part of a new breed of beginner SUPs and has enough improver performance inbuilt to make it a lasting part of any paddlers quiver.

It would be a particularly good choice for anyone looking to learn the art of SUP surfing and makes catching even the tiniest of swells a breeze.

The deck pad is extremely comfortable under foot and the overall package is well thought out and designed. Nah Skwell are a more boutique brand and as such a Nah Skwell would be a great choice for SUPers searching for something a bit different.

Although the Nahskool is essentially a learning tool, there’s enough embedded performance for early intermediates to progress and even advanced paddlers will have fun when conditions aren’t firing.